Here's an easy-to-build softbox for overhead lighting in a studio. For ease of illustration for rigging parts the softbox fabrics are not shown.

This particular softbox was designed for 24 Arri S60-C Skypanel LED fixtures but could also be stocked with Image 80's or other fixtures. 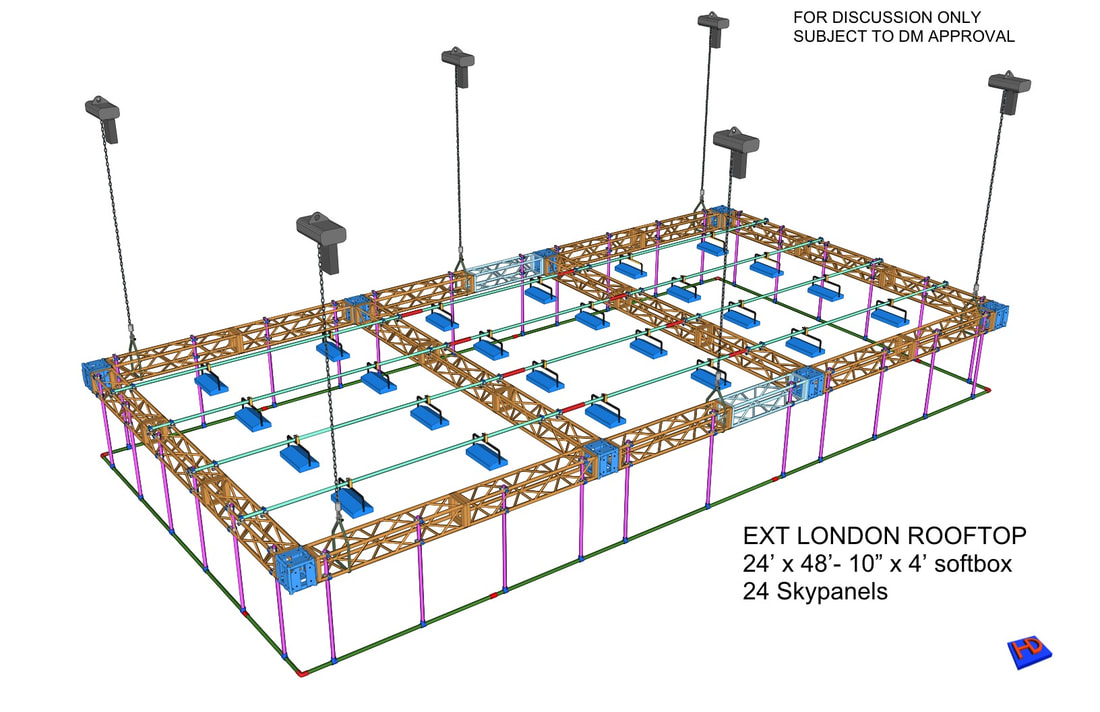 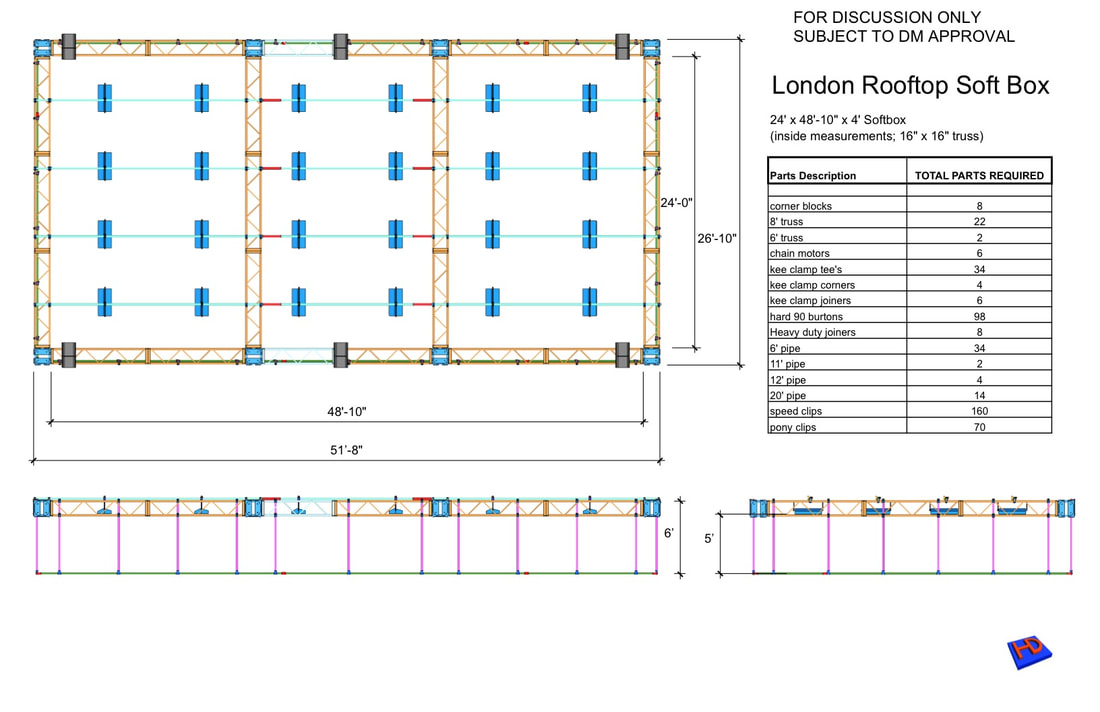 With motion capture and performance capture filming for visual effects (VIZ FX) we often only need set pieces of roughly the same size and shape that match the physical set we will insert the computer generated imagery into.

For the 'Volume' filming for VIZ FX we would typically be filming only the actors in their grey performance capture suits with tracking marks and facial cameras jumping around and interacting with the set pieces.
The set pieces that the actors would interact with could be as simple as a scaffold or steel deck riser or something more elaborate and sloped as shown below.

In the pictures below the scaffold ramps and steel decks were designed in SketchUp to closely match a sloped ravine in the forest. The contours of the sloped steel decks were augmented with carved styrofoam blocks to give a realistic true-to-life impression of the actual ravine. Once the VIZ FX people were done with turning the grey suited actors into the final characters their movement along the decks was seamlessly added to the filmed version of the actual ravine. 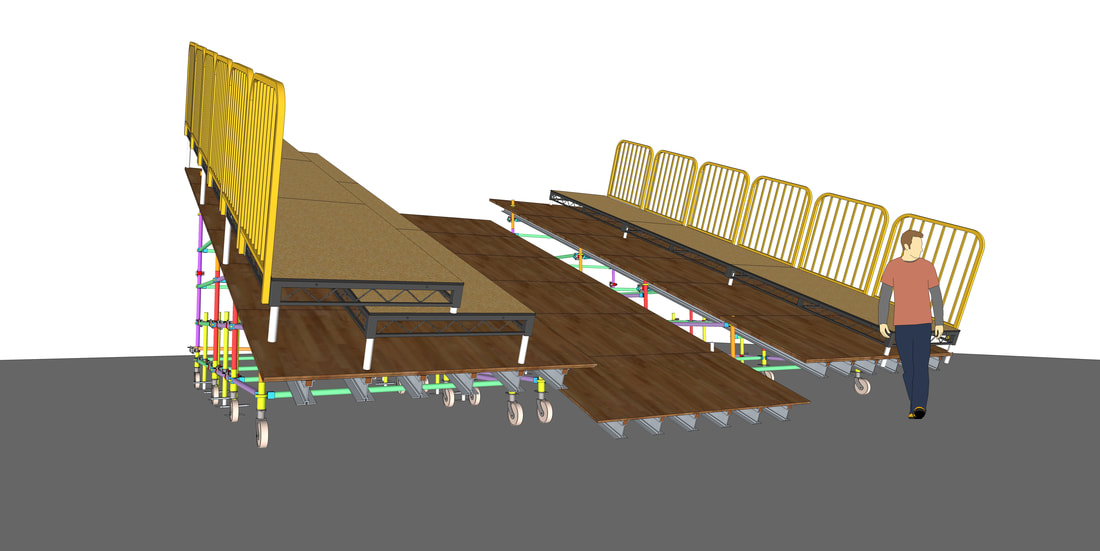 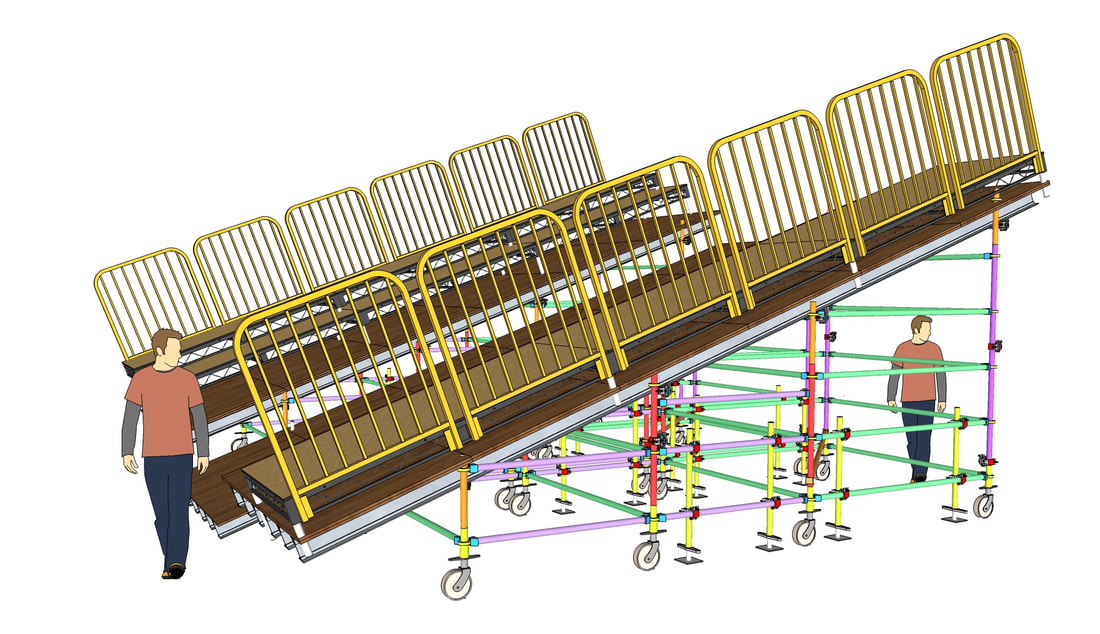 Rigging grips are often asked to hang a piece of 6" x 6" H beam under a length of truss. A large lamp, usually a 12KW or similar fixture, would be hanging from the H beam on a 1 ton rolling beam trolly. The effect is a large and easily moveable light source for blasting through a window on set or for lighting up the entire studio EXT set as if it were the light from the sun.
The rig below was designed to allow a remote-control beam trolly (a 'Mack Attack' invention) with a 20KW lamp to simulate the sun as it would  move during the day. The curved H beam had to be as per the drawing below in order to properly light the studio set. SketchUp was used to illustrate how and where the parts were to be installed and how the track would be hung from the truss. 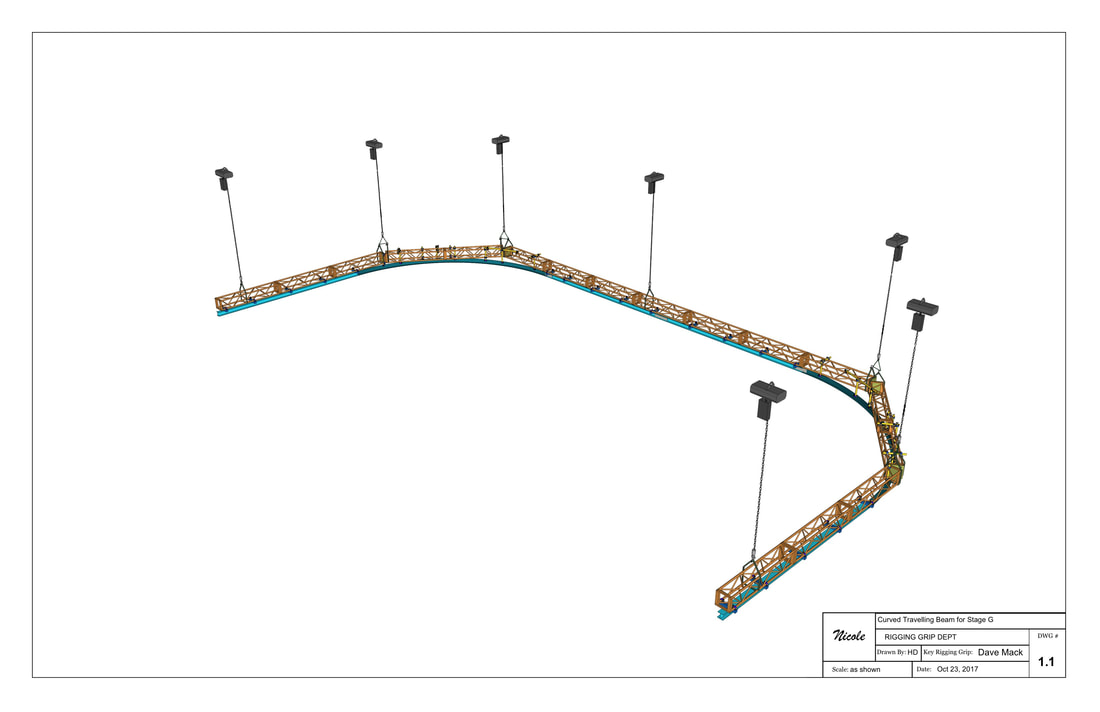 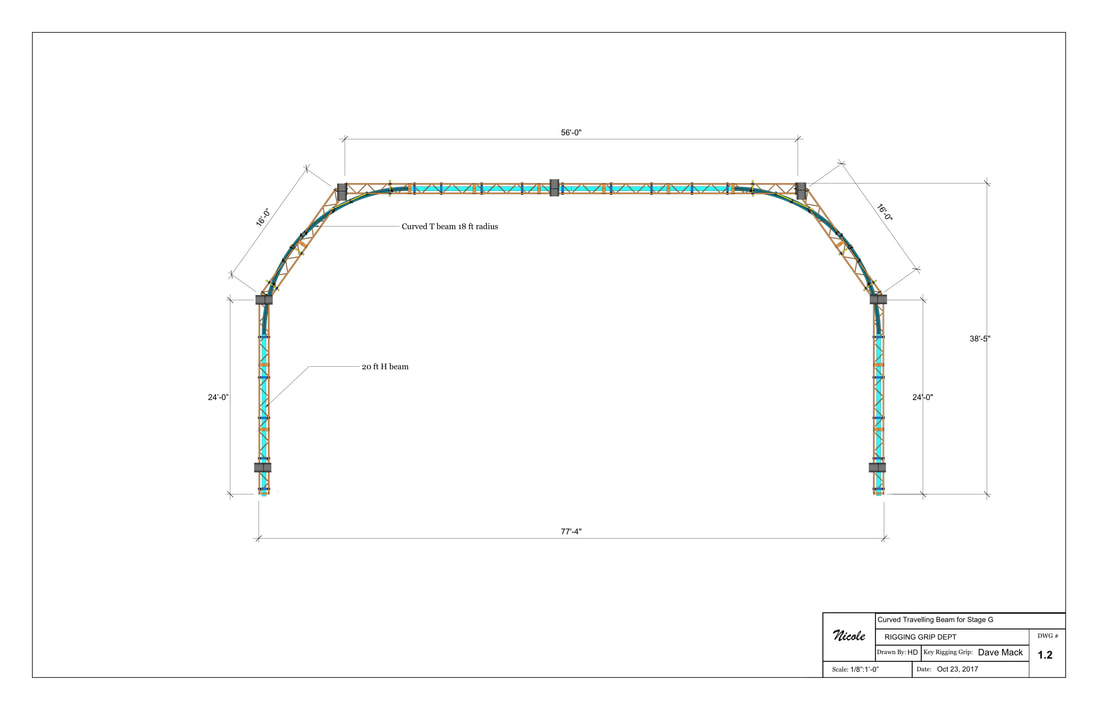 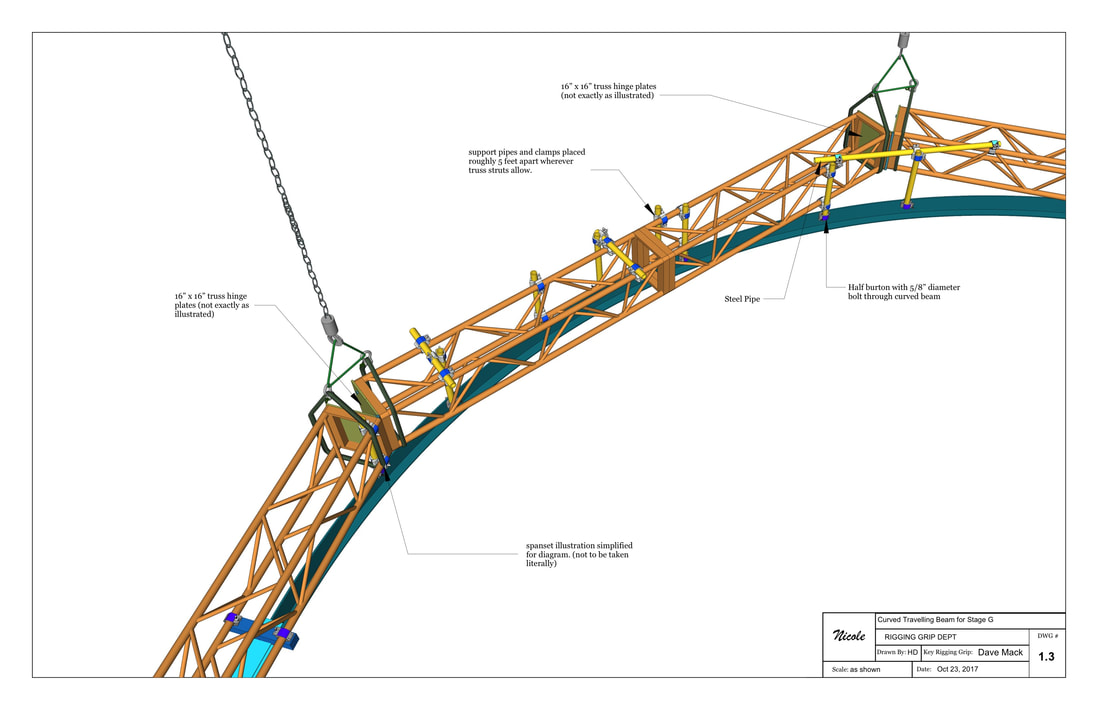 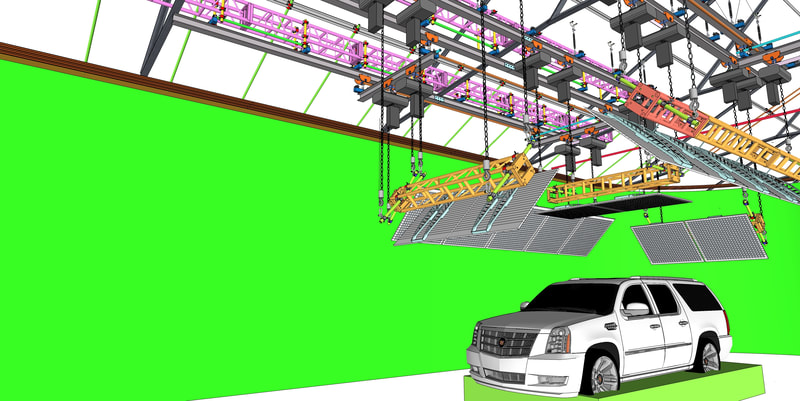 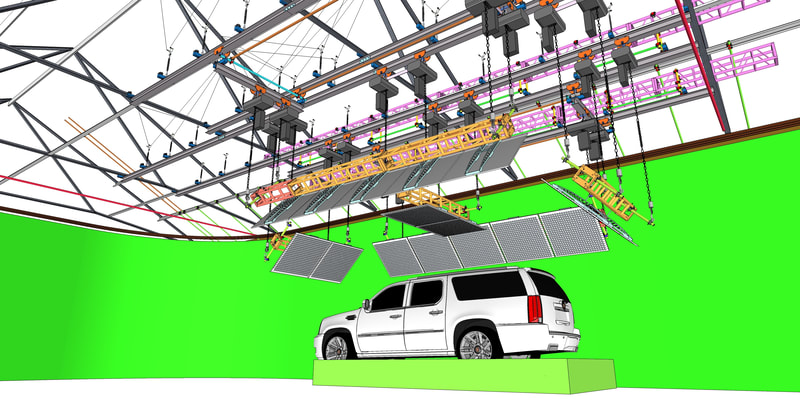 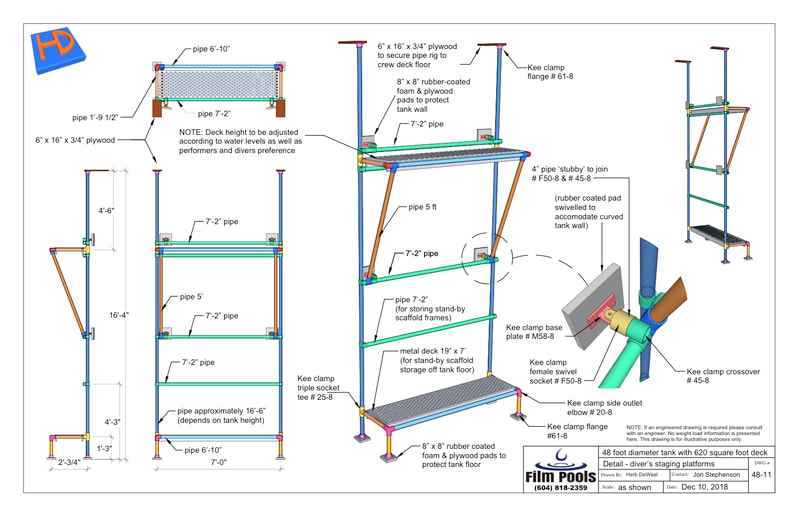